I wasn’t sure when the gig was meant to start, despite a 7.30pm time on the FB page. There was a support act which I sadly missed.

I also missed the opportunity to get a good photo, at least to show where I was sitting – but it’s all about the music, right?

And, well…what music! Ged walked out on stage looking rather dapper in a nice tartan suit and gave us a little intro and background to how The Bard’s Tale IV soundtrack came about and how he got to be involved in it.

A few minutes later the gig was under way. There was a large screen projecting video montages of the game and its landscape. Some eight Gaelic singers were involved, including the angelic voiced Eilidh Cormack and Kim Carnie, Fiona Hunter and Kathleen MacInnes – male voices too, Gregor Philp and it was fabulous to see young Donald Barker providing male Gaelic vocals and featuring as the main vocalist on one song. Wonderful harmonies from all the singers when group vocals took place.

In between tunes were spoken passages delivered by “The Bard” himself, the actor who provides the protagonists voice in the game, John Buick. At one point he was to deliver a drunken rant about how, although there had been a battle won, there was one deserter in the pack…and that role for Mr Buick (as a focal point) fell to me. I suppose that is what one gets when they sit in the front row! It made for an interesting bit of theatre, esp. for yours truly! It was both thrilling and a little unnerving, but fun. 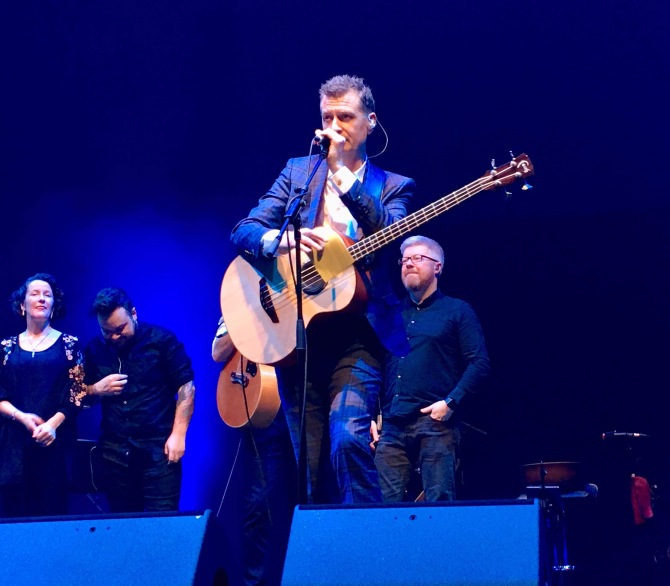 The tunes have depth of emotion as you would imagine from such a beautiful language – so harmonious. Poignancy, joy – not all the tunes are ballads, and not every song is in Gaelic. Gregor Philp performed songs in English – Snow In Summer and Across The Seven Realms – as did Fiona Hunter – A Hardworking Hand. But to hear the sounds of traditional folk music and Gaelic language vocals was a very moving experience. And you don’t need to understand the language to be moved by it and be swept up in…to sense its emotion and get an understanding of its heart and joy.

The show as a whole flowed really well. Sometimes the bits of video footage from the game could be a distraction, but the screen was not used constantly. The main point of the concert was to deliver the music and have that come across…the importance of the Gaelic language and how intrinsic it should be in Scottish culture. Something that needs to be retained for fear of it becoming lost for good.

The musicianship on display on Thursday night was incredible. And such amazing talent from all involved. Ged should be full to bursting with pride of the show he put on on Thursday night. It was a wonderful experience, as I’d had every belief it would be from the moment I bought my ticket.

Photo one by Lily Warring.

Other photos by Gordon Machray.