It was a miserable old day in Glasgow yesterday. Everything and the kitchen sink, weatherwise, came our way. There was a bit of sun to be had but not much. Mostly it was strong winds, rain, sleet, and even at one stage a crack of thunder and lightning.

I was quite cosy at home, thank you very much! I wasn’t looking forward to venturing out. Conversely, I did not want to miss the opportunity of seeing one of my most favourite bands – Warm Digits – playing here in Glasgow.

It had been nearly two years since I last saw the boys perform. A wonderful day I had at The Cluny in Newcastle seeing them at the end of June in 2018. Far too long not to have seen them. And I knew they were planning on performing new material from their forthcoming album – Flight Of Ideas. I could NOT miss this gig!

I decided a taxi was the best way to go. Wait until nearer to gig time and just grab a cab to drop me right outside. The beauty of where we live in Glasgow, it is pretty cheap to get a private hire taxi into the city for around £6.50.

I had posted on Facebook how much I was looking forward to the gig in spite of the weather, and cheekily asked would there be any chance of me observing the soundcheck. A reply back to me said it was up to the venue but I was welcome to try. Soundcheck was happening at 6pm.

I was unsure where to go. No sign of Andy or Steve in the Winged Ox so assumed they must already be setting up for soundcheck. I walked through a set of doors and down a short corridor. There were two sets of doors. I could see Steve and Andy on the stage. Could I just…push the door open and let myself in? Yes! A young lady was there setting up things in the bar at the rear end of the room, just by the door. “I’ve just come in to see Steve and Andy, is that okay?” “Yeah, sure”, she said, with a mild shrug. They both seemed genuinely happy to see me, which was a very lovely thing. You know…I can’t help but feel a little bit pushy and a bit of a pest…but it’s just the enthusiasm. And they are such lovely guys … and yeah. It was such a wonderful experience last time at The Cluny. I had never been to a soundcheck or had an opportunity to “hang out” with a band like that ever in my life before. I felt very privileged. 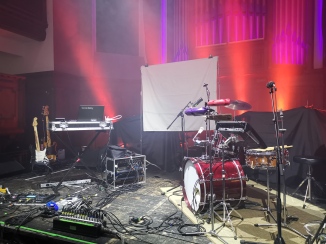 And that feeling was the same last night. Chatting to them while they were setting up. Asking them how the tour had been going so far, and just…catching up on general “life” stuff too. Experiencing again what goes on in the soundcheck. And being a bit privy to how they were going to be sounding as they actually performed “for real” is a great thing. I feel anyway. And the way they were sounding during soundcheck, I knew they were going to be fab when the real show started. 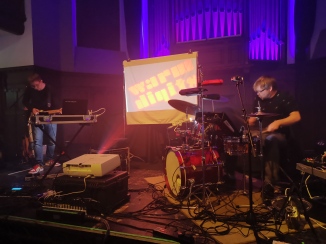 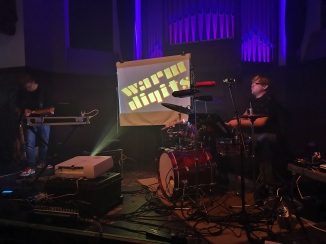 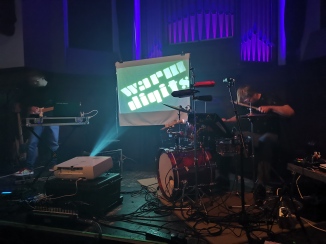 Soundcheck done and they were both heading next door back to the Winged Ox for a bite to eat. I was invited along. Before I left with Steve one of the security guys handed Steve his AAA pass. The security guy says to me “do you want one?” I look to Steve, then back to the security guy “Erm…if I’m allowed to have one, yeah!” He had run out of passes but went off and got me one. Never had one of them in my life. Not one GIVEN to me for my use at a gig. 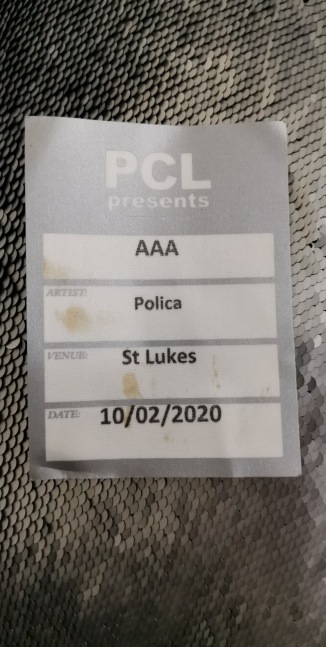 Food consumed. A catch up with friends that came to see the show and it was show time! They performed six songs in the set. Four new tracks from the album – the lead single, The View From Nowhere…then, Feel The Panic, Replication and False Positive (I think that’s correct). Then two previous tracks, End Times – from the Wireless World album and Weapons Destruction from debut album Keep Warm. Weapons Destruction is usually the set ender – or the encore, depending on whether they are headlining the gig or not. And IT ROCKS!

They were sounding as fab as ever last night. And the new tracks are great. Both the instrumental tracks, Replication and (I believe it to be) False Positive, were the ones I enjoyed most last night. But the whole set was great. The only problem with the set was it wasn’t long enough! They were on for just 30 minutes. But I was so happy I went in that yucky weather because it was the best 30 mins!

I stayed on to watch some of Poliça who are quite atmospheric. Kind of…ambient electronica. I was enjoying them. The only criticism I would give is they could end up sounding a bit…”samey”. To me there wasn’t too much diversity in the tracks I was hearing them perform, but I only watched the first 25 mins of their set. But I enjoyed the look of them. Their singer had small coloured laser lights projected on her, swirling around her body and on the walls around St Luke’s. They sounded really good in live performance. I had been listening to them on and off for a couple of weeks so I’d be a little familiar with the tracks they’d perform. Personally, I think the feeling of their music would be more suited to a seated venue. That sentiment definitely DOES NOT apply to Warm Digits though. You need to up and dancing, foot-stomping, head-banging with those boys! 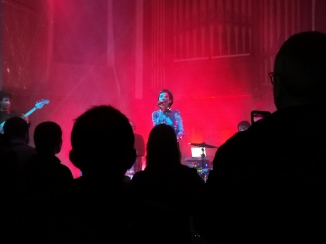 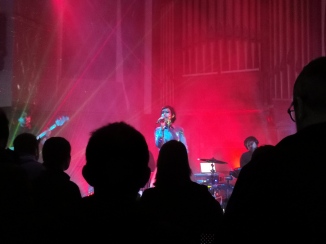 A huge thank you to Steve and Andy for once again giving me a fantastic night out. Great music. Great atmosphere. A great catch-up and chat. YOU GUYS ARE THE BEST!

They just have the two gigs left supporting Poliça – tonight in London and tomorrow night in Brighton. But they will very soon be on the road again with a headline tour for the Flight Of Ideas album. And they are set to play in Edinburgh and Newcastle. No official dates just yet, but I will definitely be booking tickets to see them in these two cities. And I will give details on the blog once info comes to hand.

They will also be doing an album launch at Rough Trade East in London on April 4th. I am gutted I cannot go because I’ll be in Paris seeing Simple Minds! But if you can get to London to see them at Rough Trade, do so! Tickets are available here. But be quick! Tickets for these Rough Trade events go FAST!