What the hell did I do wrong, now? I was only trying to be light-hearted. Have a bit of fun. Is it “irrelevant” to ask to see a current pic of the lead singer of your fave band? Was it deemed rude? I didn’t swear. Any sense of innuendo was VERY THINLY LACED (he was the one who was topless in the pic I was referring to…the Jan 17th pic of him holding his Paddington bear mug. I wasn’t the one putting the product placement in).

There are some weird decisions of what gets deleted that takes place on SMO FB. I genuinely don’t mind…I just find it bloody confusing. I’ll post something that I think will last all of five mins up on the visitor wall before it gets taken down (and expect it to be deleted) – ie: my captioned pic of him doing his flat-on-his-back-from-knees-down thing that he does (gotta work out a more succinct name for that move!) and Derek Paterson looking on at the side of the stage bemused. Jim went ahead and turned that into a post on the main SMO page! No one was more stunned than me by that one…

Then another time I’ll post something that I think is pretty darn innocuous (like last night) – ie: could I please see a pic of you, Jim (thinly laced meaning of “I miss you and I just want to see you”) and THAT gets deleted???!??!

It would make sense if there was some kind of consistency with it. Like, “you cannae ask this, this and this”. I mean there are very OBVIOUS things that I would never post or ask, etc. It may not seem it to some, but I DO have a moral compass!

Anyway…sorry…I was just once again left quite miffed having wanted to just make a little lighthearted gesture that I was missing him. 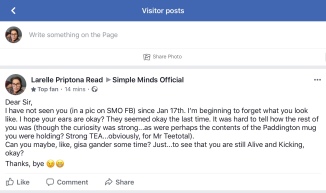